Athens, the city of legends and the cradle of Western Civilization,  is a place to immerse yourself in ancient history and explore the past.

But sometimes the city’s hustle and bustle make you long for quieter horizons. Here is our selection of the best weekend escapes from Athens where you can still enjoy that perfect combination of ancient history, exquisite cuisine and beautiful scenery that makes the city such a draw for visitors from all over the world.

Nafplio, once Greece’s capital before it became Athens, is a charming coastal town in the Argolic Gulf. The Old Town of Nafplio has remained the same for over a century and is blessed with natural beauty and infused with an enchanting, almost romantic atmosphere.

Take a stroll around the Old Town to see the well-preserved neoclassical mansions with Venetian balconies, its Syntagma Square, Agios Giorgos church and of course the iconic Bourtzi, the Palamidi fortress, and the Nafplio ancient Acropolis.

It is obvious that Nafplio has too many sights worth seeing. Probably too many to be seen in one visit. So you will probably come again and again. Even better, stay overnight and also visit Mycenae on your way back to Athens. As the birthplace of ancient Mycenaean civilization, you can see remnants of palaces, ramparts and even the Tomb of Agamemnon.

Escape from busy Athens and enjoy a small preview of some of Greece’s beautiful islands with a one-day cruise to Aegina-Poros-Hydra. Each of the three islands comes with its fascinating legends and particular individual aspects.

Take Aegina for example, the land where God of gods Zeus had a baby with nymph Aegina, daughter of Asopo. Their son Aiakos was named king of the island, and the population of ants was turned into humans to be his subjects, which is the reason why they were called Myrmidons. Today, Aegina is a lovely resort where Athenians enjoy weekends away from the city.

Pine-covered Poros is peaceful and hospitable, and both the ruins of Poseidon’s Temple and stunning views across the island make it a huge draw for visitors. It is said that it was here that Dimosthenis (or Demosthenes), a prominent defender of Athen’s independence against other cities, killed himself by drinking poison.

The island of Hydra is one of the most beautiful in Greece. The significant advantage of the island is that there are no cars; instead, donkeys serve as the primary means of transportation. Well-preserved for centuries, Hydra, and her picturesque harbor is a sight to marvel at.

Chalkida, the capital town of Evia, is another ideal getaway from Athens.

After only an hour’s drive, take a coffee break by the seafront while enjoying the view of Evripos straits. Visit the town’s Archaeological and Folk Art Museum as well as the Red House, a neoclassical building with four clay statues on its top and the Town Hall, known for its harmonious architecture.

The Roman Aqueduct and the Emir Zade Turkish Mosque are clearly worth a look too. After you’ve covered the town, take the opportunity to head north, and make sure to visit Loutra Aidipsos, boasting of more than 80 thermal sources for a stop at this beautiful spa resort. Because if you have to escape, you should do it right.

Parnitha (or Parnis) is located only 10 km away from the city center of Athens and offers an excellent escape into the wild outdoors. Ideal for hiking aficionados, nature lovers – the Parnitha flora is one of the richest in all of Greece – and, perhaps surprisingly, gambling fanatics, the area attracts many visitors.

If you want to make an overnight stay, stay at the Parnis Palace Hotel, at the foot of the mountain, or if you prefer something more secluded, head instead to the Mpafi refuge. The site offers many hiking trails within the national park. Escaping in Parnitha is an incredible way of reconnecting with nature and recharging your batteries.

At the foot of Mount Parnassos lies the majestic sanctuary of Delphi, home to the most famous oracle of ancient Greece. According to mythology, Zeus sent two eagles from the ends of the universe to find the center of the world, and they met at Delphi.

So it was for many centuries the most important cultural and religious center. After visiting the ancient sanctuary and all it has to offer, why not take the next day to explore the area and take part in a walking tour?

Located just an hour away from Lavrio Port via ferry, Kea or Tzia are both little Cycladic gems that offer yet another favorite summer weekend escape for Athenians.

With its pristine beaches, hiking trails and ancient sites, Kea is an oft-overlooked destination in Greece. The charming little town of Ioulida offers another insight into the cool island vibe, and if hiking is not your thing, explore the island by way of a diving trip around Kea.

It is said that Cape Sounion, home to the Temple of Poseidon, was a welcoming sight to ancient sailors on their way back home to Athens.

Though only some of the columns are still standing, the sight is particularly magnificent to gaze at. After your visit and a swim, eat at one of the two tavernas on the beach nearby. 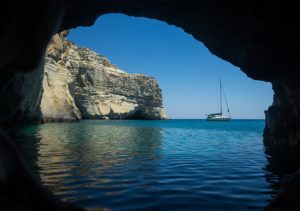 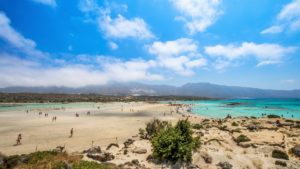